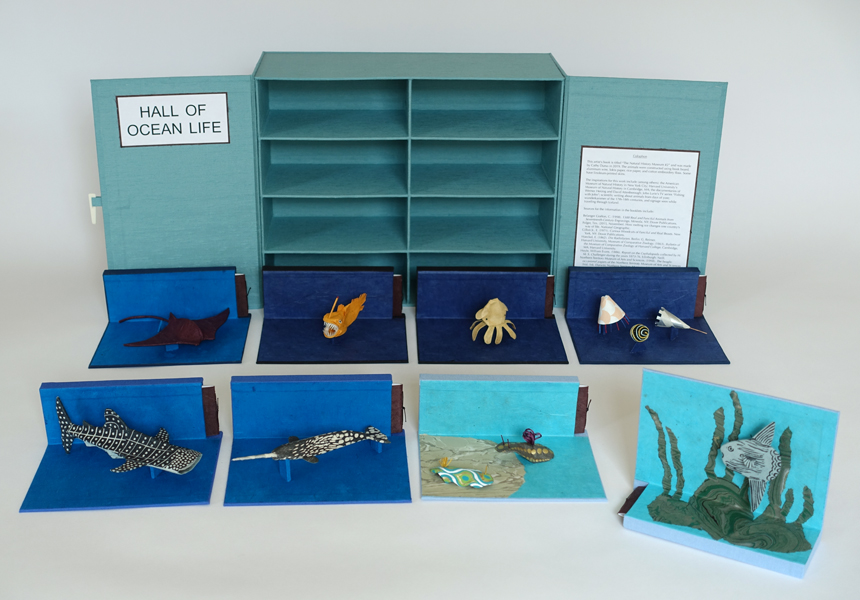 A miniature Hall of Ocean Life, this artist’s book contains eight drawers, which, when pulled out of the box that houses them, reveal dioramas of eight different ocean-faring animals, each with its own booklet describing the animal and its peculiar habits and history. The animals were constructed using book board, aluminum wire, lokta paper, rice paper, and cotton embroidery floss. Some have linoleum-printed skins.

As a child, I spent a lot of time with my family at the American Museum of Natural History in New York City. I fell in love with that museum, and the sense of awe and wonder the great halls inspired. My love of natural history museums only grew when I lived in Boston during my twenties, and spent time in Harvard University’s Museum of Natural History. That museum could not have been more different from New York’s. Instead of the spacious, open halls of the American Museum of Natural History with their grand and beautiful dioramas, this museum was like a cabinet of curiosities – stuffed full of animals, their skins coming apart at the seams, and not much in the way of information about the animals.

I love both of these museums and they have inspired this miniature museum hall. Other sources of inspiration include the documentaries of Werner Herzog and those narrated by David Attenborough; John Lurie’s TV series “Fishing with John”; scientific writing about animals from days of yore; wunderkammer of the 17th-18th centuries; and signage seen while traveling through Iceland.

The book stays closed with a bone clasp: 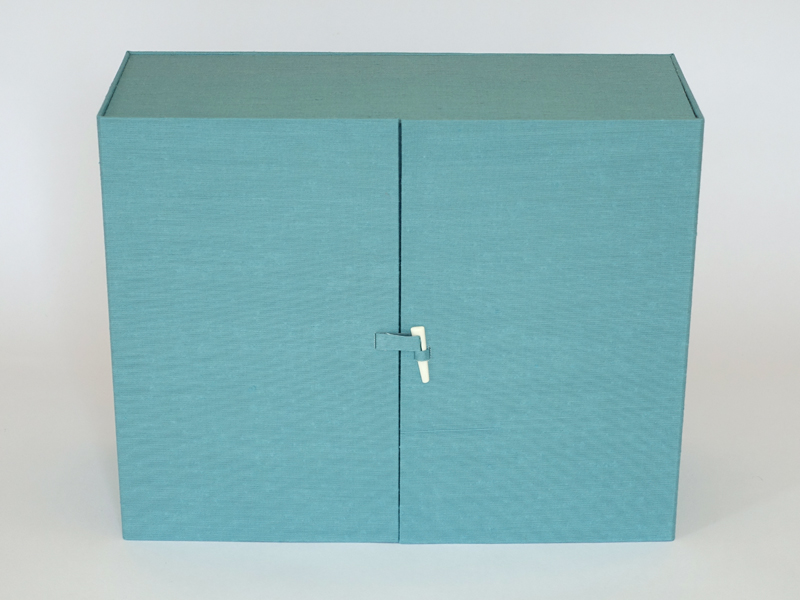 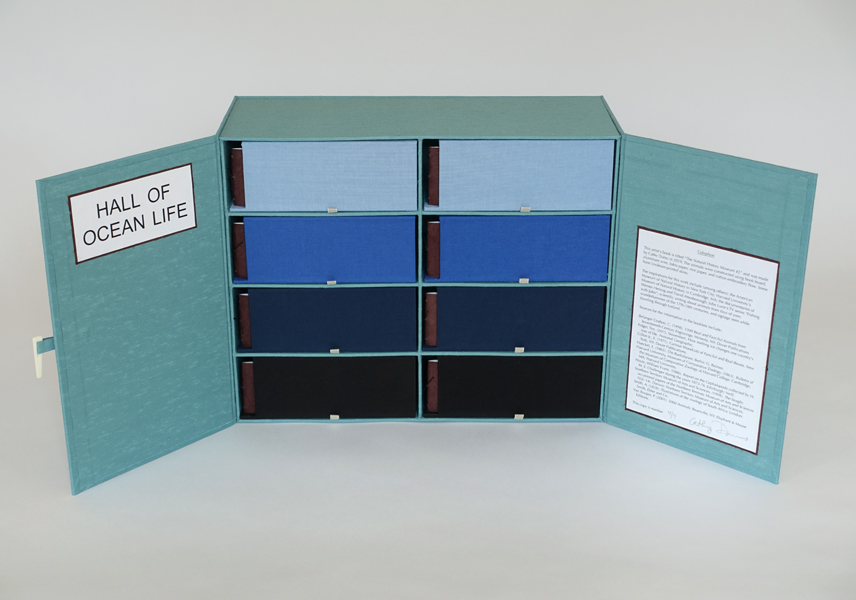 Pull the little linen tab at the bottom of each drawer, and the drawer will slide out: 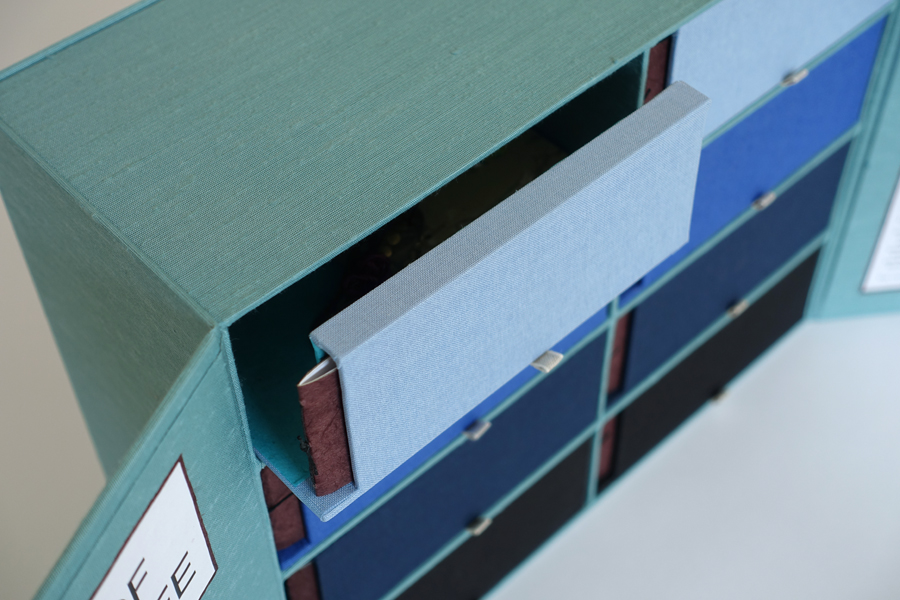 The nudibranch diorama is revealed: 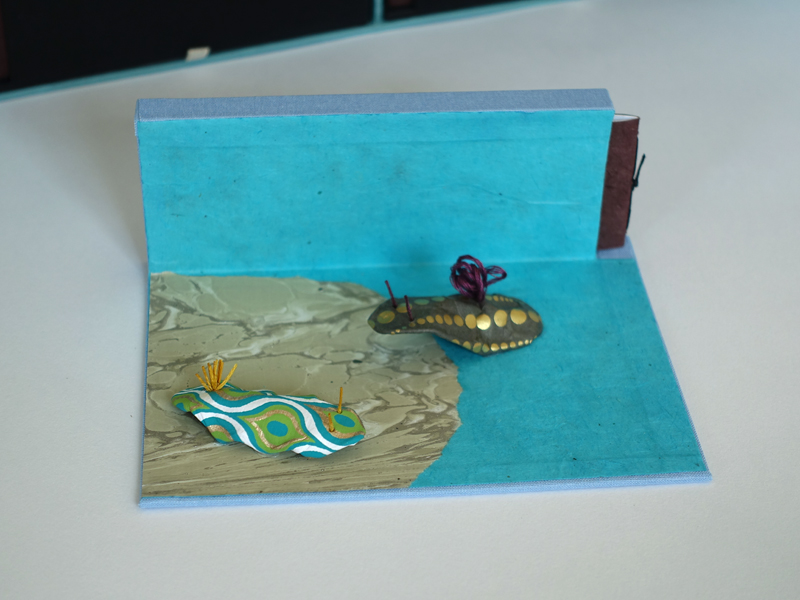 A little booklet can be pulled out of the slipcase built into the drawer: 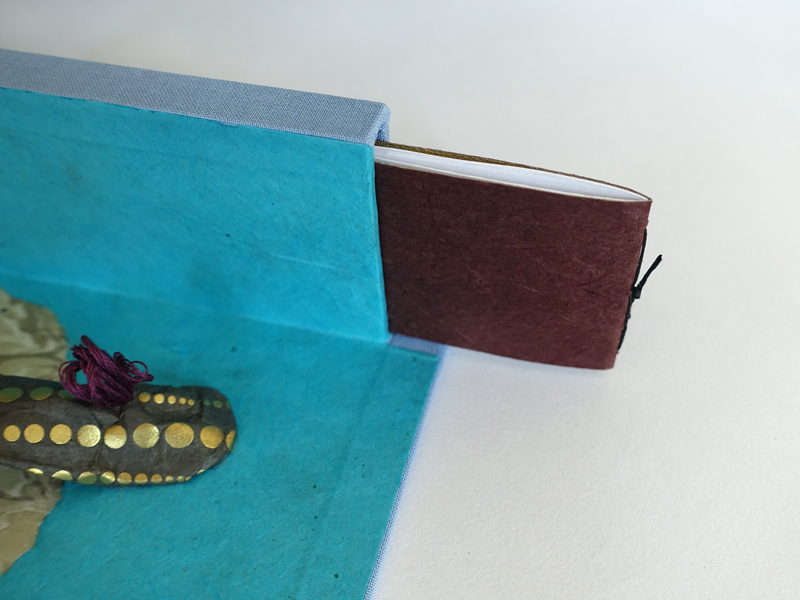 Covered in brown lokta paper and lined with shimmery gold, reminiscent (in miniature form) of the grandeur of the American Museum of Natural History, the booklet has a snappy alliterated title for each animal. 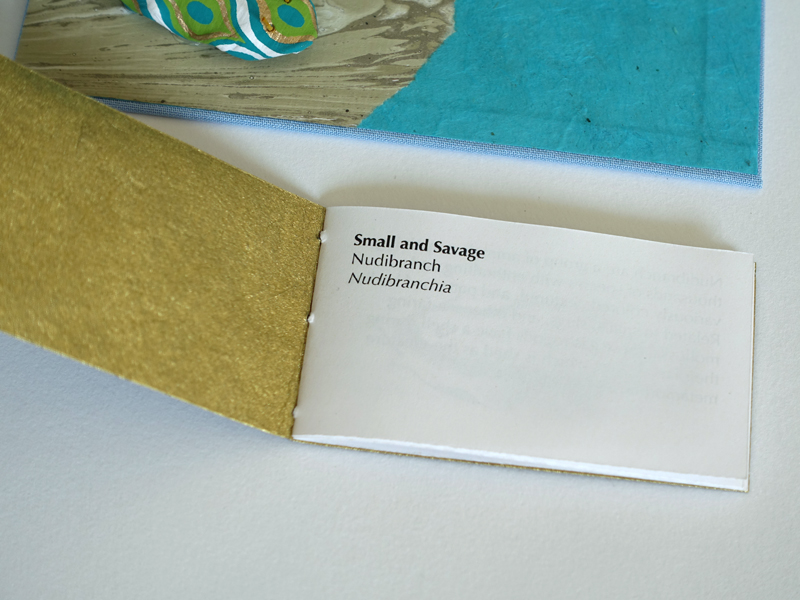 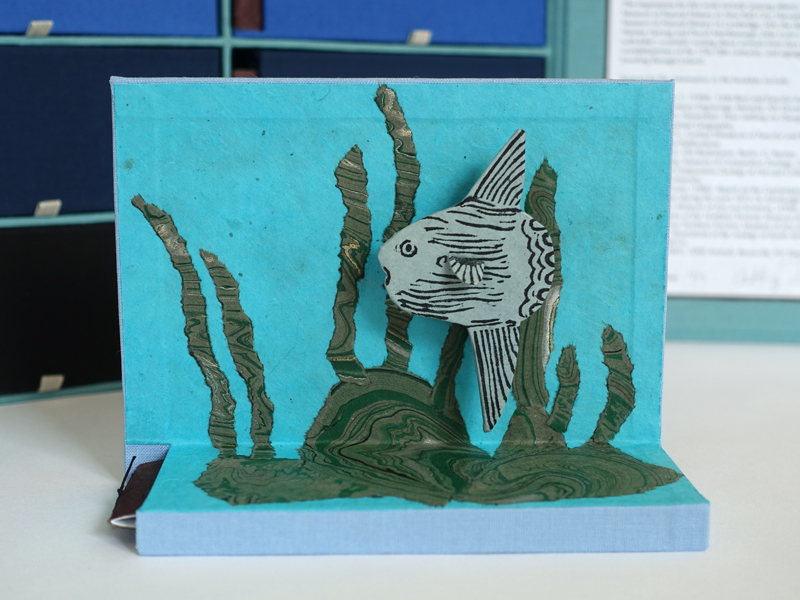 The booklets contain elements of mystery, history, and humor, such as this reference to a certain video on YouTube made by Boston fishermen who came upon an ocean sunfish: 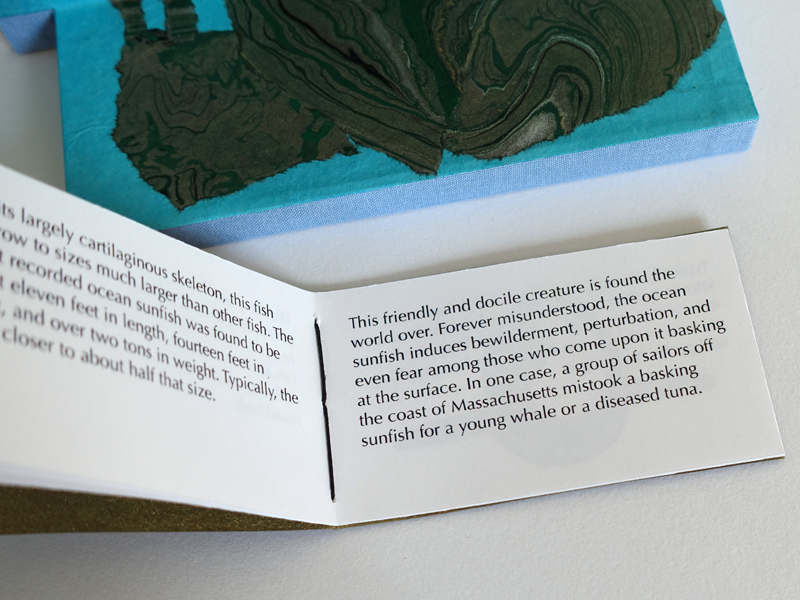 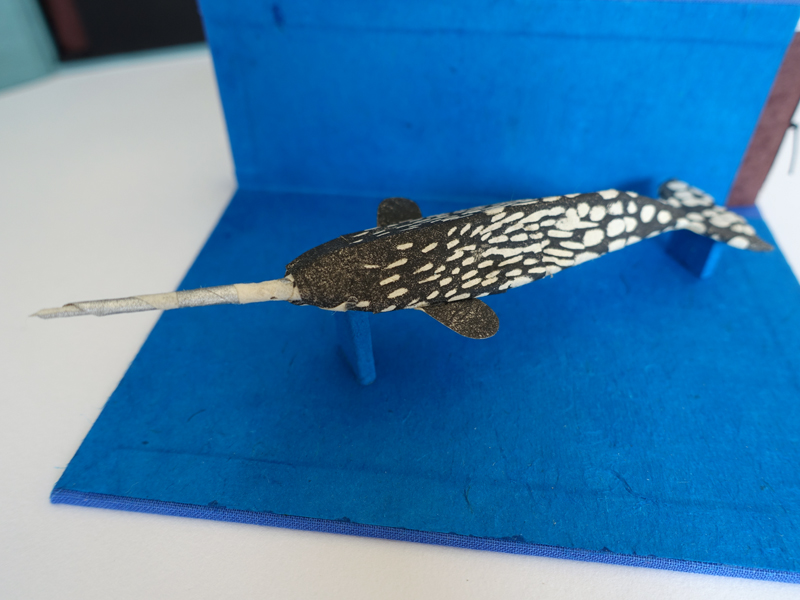 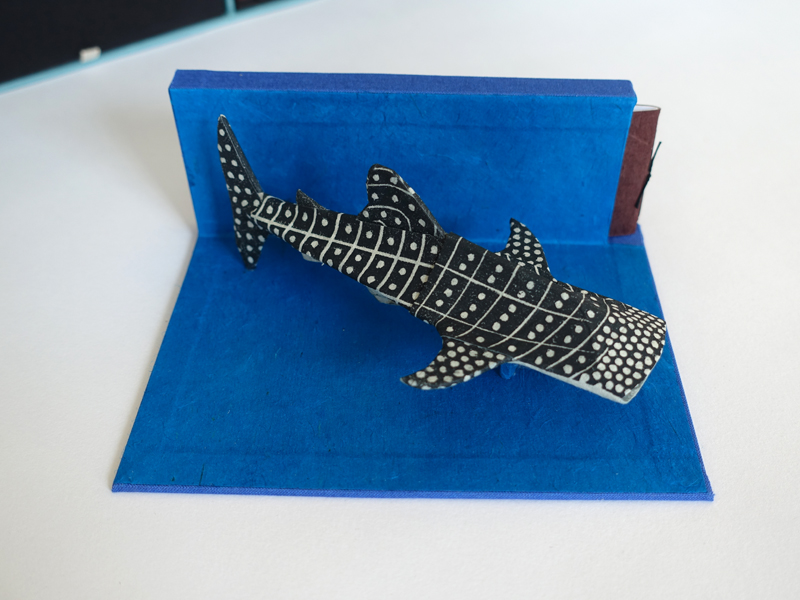 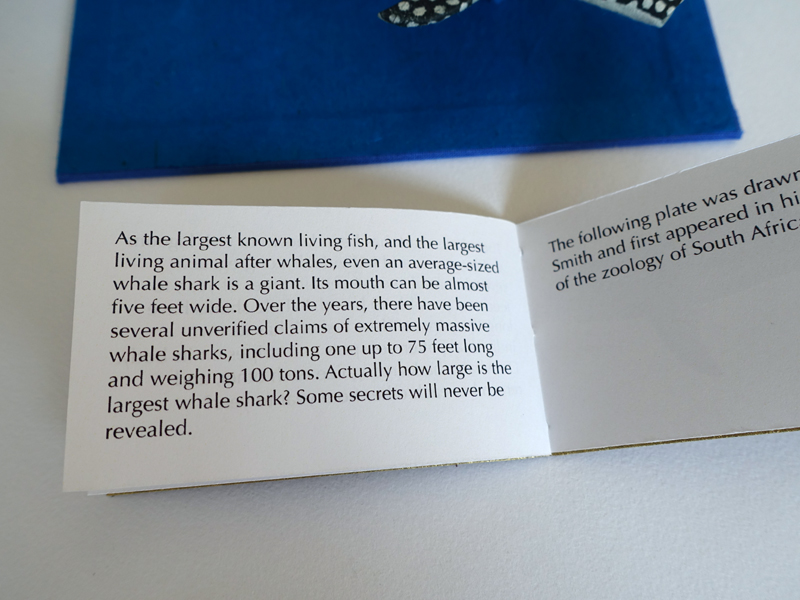 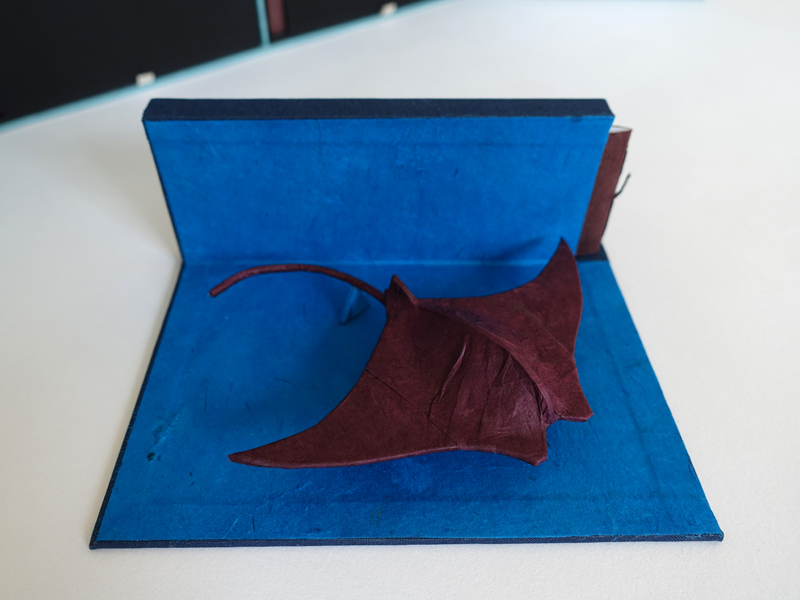 The radiolarian diorama, whose booklet features the beautiful illustrations of Ernst Haeckel: 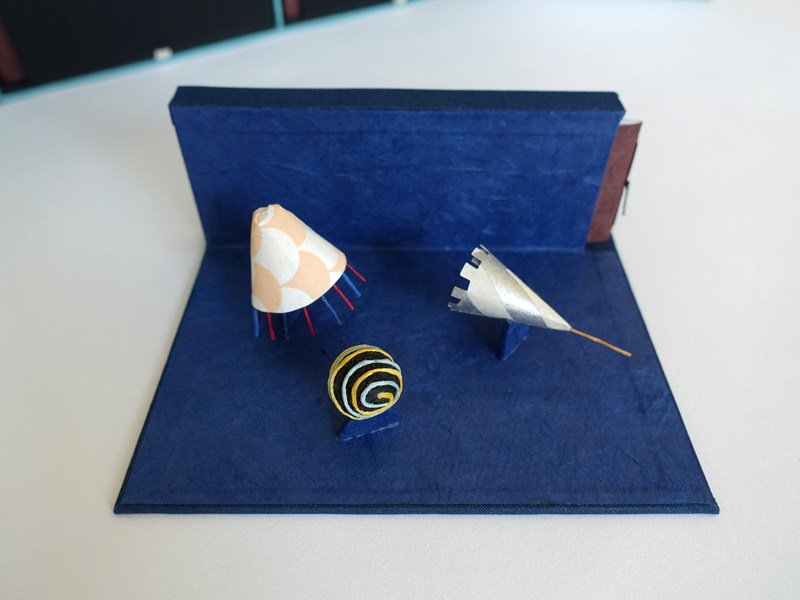 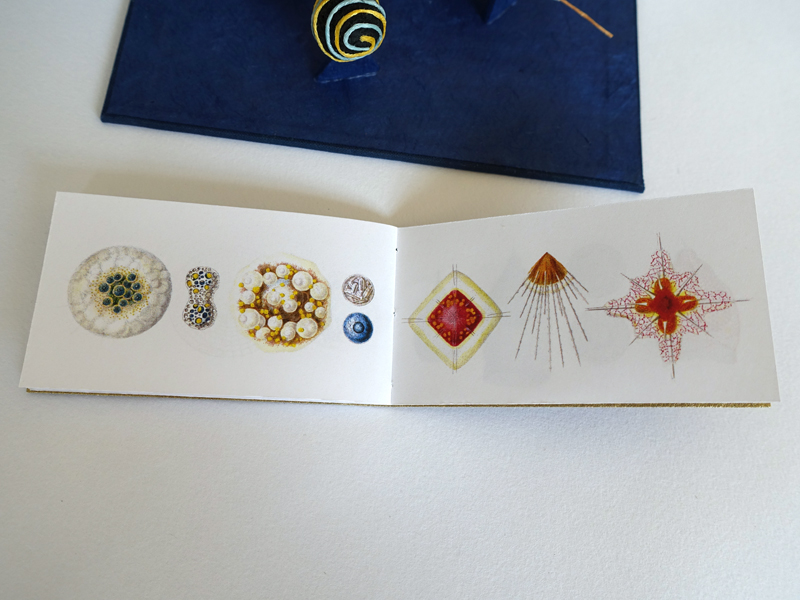 And finally, in the darkest depths we find the dumbo octopus and the deep-sea anglerfish: 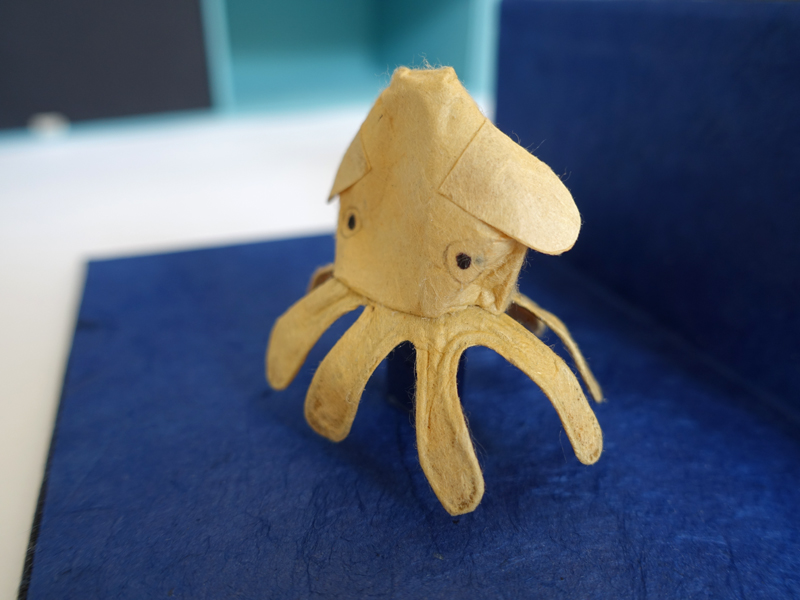 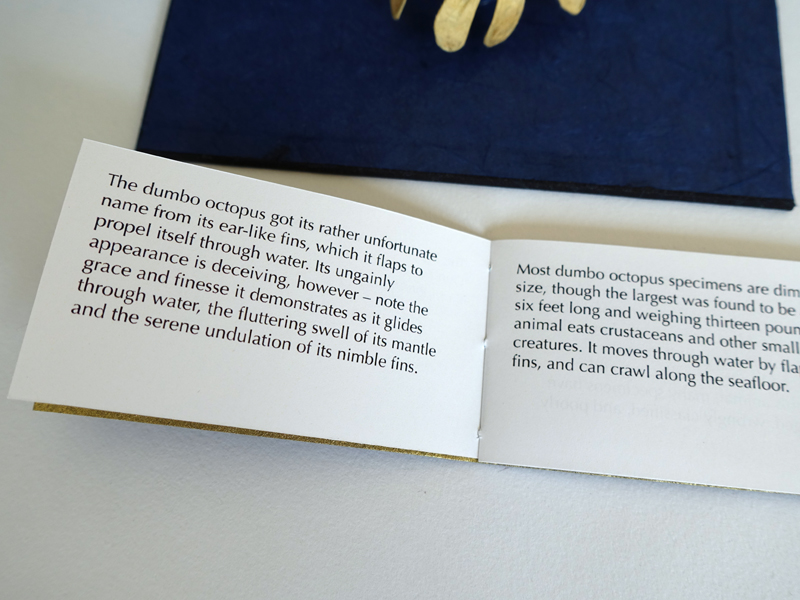 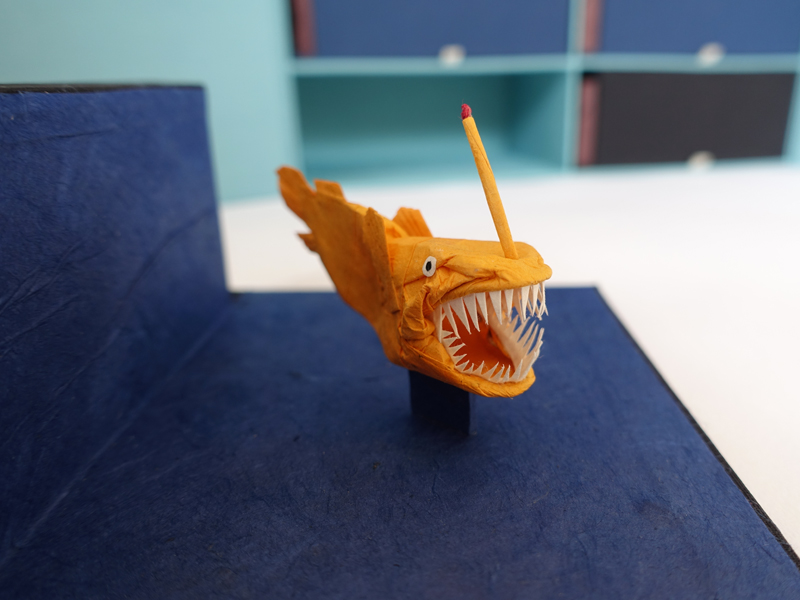 This artist’s book is meant to be opened and explored. I hope it will put a smile on the viewer’s face, make them curious about the natural world, and perhaps make them reminisce about spending time in natural history museums as a kid, and the sense of wonder and joy those experiences inspired.